Simple and elegant with minimalist straight frame design. A separate back frame and our patented 4 point face plate clipping system allow the option of matching or contrasting elements.

Sleek and stylish with a delicate stepped-edge frame adds a classic touch to this plate with hidden fixings. A separate back frame and our patented 4 point face plate clipping system allow the option of matching or contrasting elements.

Modern and elegant two-part plate with curved edge frame and hidden fixings. A separate back frame and our patented 4 point face plate clipping system allow the option of matching or contrasting elements.

Stylish and attractive with a Georgian rope frame design adds interest to these two-part plates. Seven stunning front plate finishes and six frame and insert finishes give an extensive choice of combinations.

Elegant and classic with a beaded frame design adds a touch of class. Seven standard stunning front plate finishes and six frame and insert finishes give a limitless choice of combinations.

Slim and elegant with soft rounded edges, the Hartland CFX® range helps provide the finishing touch to any project. The faceplates are firmly held in place to the back frame with a patented 4 point clipping system, concealing the fixings for a seamless finish.

Sheer's minimalist flat plate switches and sockets meld seamlessly into today's interiors. Concealed fixing allows it to be very flexible for different areas of a project and costs can be minimised without losing continuity of design.

The Perception CFX® range of concealed fixing electrical wiring accessories with snap-on clear front plates, is cleverly designed to insert your own wall paper or alternatively the supplied template can be painted, thereby blending discreetly into the interior decor. Invisible Light switches.

Sheer's minimalist flat plate switches and sockets meld seamlessly into today's interiors. Mixing box fix with grid and concealed fixing in this range, allows it to be very flexible for different areas of a project and costs can be minimised without losing continuity of design.

with the NEW Anthra Gray added to the collection.

a Contemporary design and superior quality finish to ensure that the floor sockets effortlessly inject style into your interior. Ideal in the home or office.

Hartland CFX® Colours range will enhance any surroundings and its patented concealed fixing system affords seamless styling and sophistication. The sleek finish is attractive and tactile, whilst the practical robust polycarbonate provides a lower priced alternative to the metal designs.

While the plates affix normally to BS wall boxes the various inserts clip into Euro standard apertures. Inserts can be combined to requirements and installed on Euro aperture plates that are available in a number of styles compatible with other accessories from the Hamilton range.

Grid-fixed switches provide complete flexibility. Separate modules can be clipped together on the grid to create the desired combination. This can be done on-site for an instant solution.

An attractive and unique range in four natural wood finishes with a choice of Ovolo or Chamfered edge. The plates are manufactured from timber sourced from sustainable woodland, as far as possible. Ideal for a building with character.

Bloomsbury replicates the traditional style of the original light switch while meeting today’s standards. There are two designs of dome – fluted or plain mounted on a wooden plinth in four different finishes, sourced from suppliers who carry the FSC logo.

Bloomsbury replicates the traditional style of the original light switch while meeting today’s standards. There are two designs of dome – fluted or plain mounted on a wooden plinth in four different finishes, sourced from suppliers who carry the FSC logo.

A range of weatherproof wiring accessories. Incorporates an easy-to-open latch that ensures the integrity of the gel seal that protects the socket, making it suitable for use in both indoor and outdoor environments where devices are at risk from penetration from water, dust and small particles.

An all metal range in a stylish silver finish and the back boxes have been developed to ensure an exact fit, for that seamless look! It’s ideal for use in residential projects looking to achieve a modern industrial look with a sophisticated edge. Tough and impact resistant, Metalclad is also suitable where hard wearing performance is required: workshops, garages, sheds, schools and industrial premises.

Hotel: Hamilton’s custom-made plates get the Tudor seal of approval at the Thornbury Castle Hotel.

The Project: Built in 1511 as an extravagant country retreat by Edward Stafford, 3rd Duke of Buckingham, Thornbury Castle has played host to many Kings and Queens during its time. Top of the royal guest list were Henry VIII and Anne Boleyn, who spent a ten-day belated honeymoon there in 1535, two years after they were married as part of their ‘Royal Progress Tour’.

The King coveted the castle and took possession when Edward Stafford was conveniently found guilty of treason and executed – the estate was confiscated and remained part of the Crown Estate until 1554, when it was given back to the Stafford family. The castle also became the residence of Princess Mary, daughter of Henry VIII and Catherine of Aragon, which enabled her to get away from her father’s court during her teen years.

Populated throughout history with both regal and wealthy guests, Thornbury Castle, a Grade 1 listed building, became a luxury hotel in 1966, and remains the only Tudor Castle in the UK operating as a hotel and restaurant. 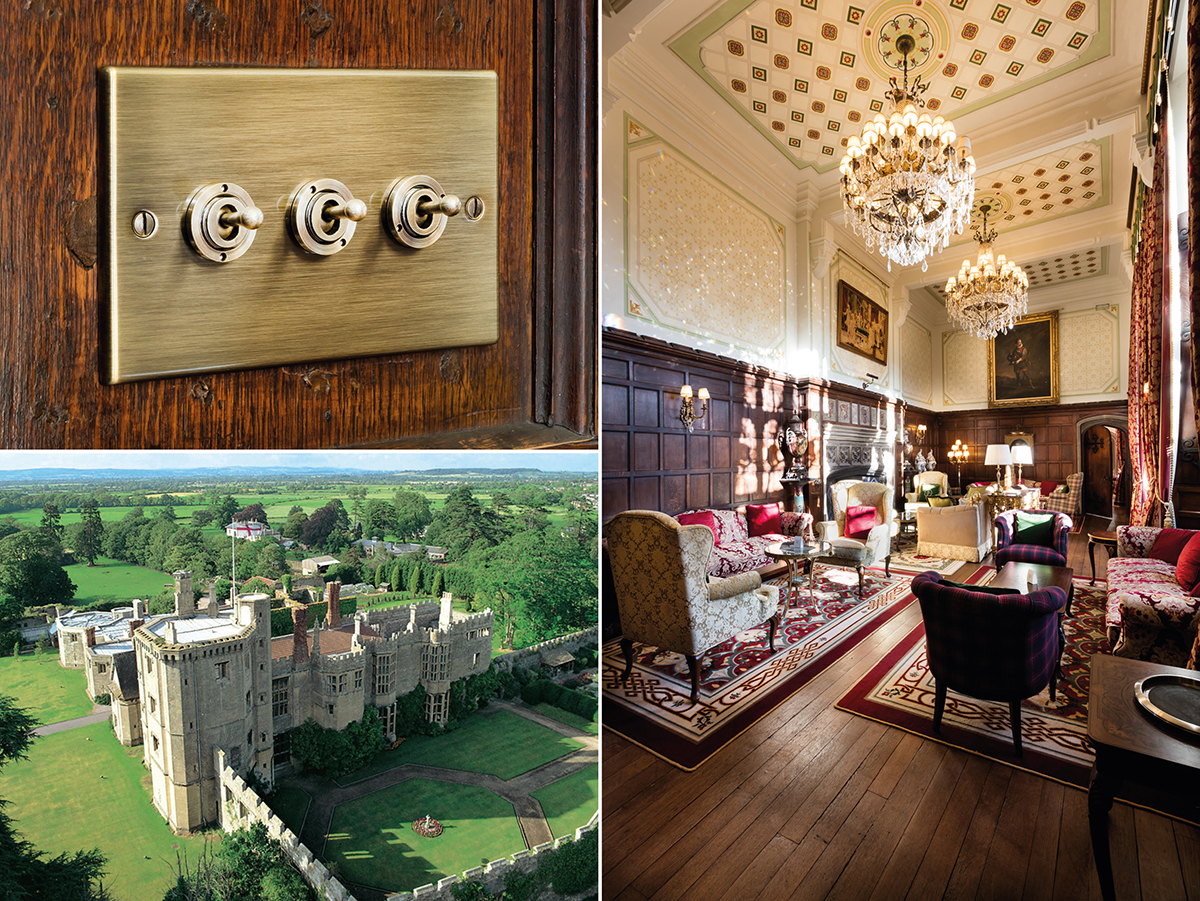 The hotel has 27 bedchambers, fifteen of them featuring sumptuous four-poster beds, decorated using traditional materials and artisan design to create a unique regal experience. The castle hotel boasts six deluxe suites, including the recently restored Henry VIII Suite – the actual room where the King and his Queen, Anne Boleyn stayed during their ten-day royal tour. Along with the newly named ‘Catherine of Aragon Tower Suite,’ extravagant Tudor Hall and dining room, Thornbury Castle Hotel encourages guests to immerse themselves in the Tudor high-life. 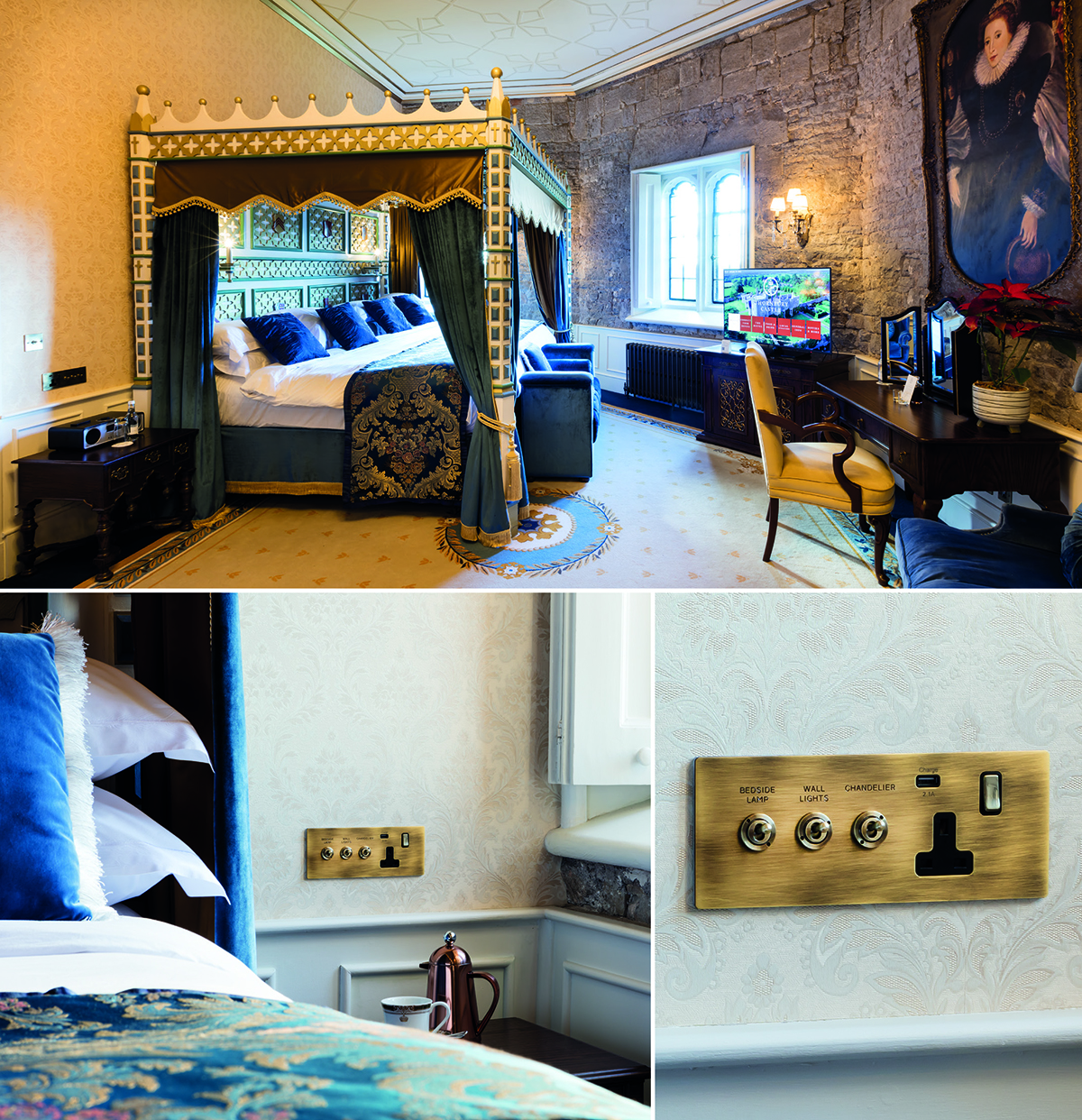 The Brief: Under new ownership, the hotel embarked on a multimillion-pound refurbishment program to channel 1520s Tudor grandeur with 2020s contemporary hospitality. Due to its historic significance, all works commenced under the stewardship of Historic England. To meet the upgrade conditions to the electrical and lighting system, project architects, Childs Sulzmann needed to deliver a solution that used much of the building’s existing infrastructure including: using existing wire ways; fitting new wiring accessories within existing recesses in the wooden skirting where possible; using existing wire chases and leaving the original 1500s stonework untouched.

A sumptuous bed is the centrepiece of each room, and it was decided guests should naturally be able to control the room lighting from the bedside position – at the simple flick of a switch. The design and finish of all wiring accessories needed to complement the rich Tudor décor. USB charge points, a modern-day must-have, needed to be incorporated into the final design. It was essential that this 21st century technology blended seamlessly within the 16th century luxurious surroundings.

The Solution: With 24-carat gilding used throughout the castle hotel together with gold finished tapestries, carpets, and Tudor-styled soft furnishings in many rooms and hallways, the decision to complement these with Antique Brass finished wiring accessories was not a difficult one. Electrical contractor, Electrio Limited, undertook all of the installation work and invited Hamilton to the project. Hamilton’s popular Hartland collection, with its slim, sleek profile was the ideal box-fix design to harmonize with the ornate brass bedside lamps and dark wood panelling.

The desired bedside lighting control was achieved with custom-made plates from drawings supplied by the project architects, Childs Sulzmann. The plate functionality included control of the room chandelier, table lamps and beside lamps within each room, plus a single power socket with 2.1A USB port for charging a smart device. 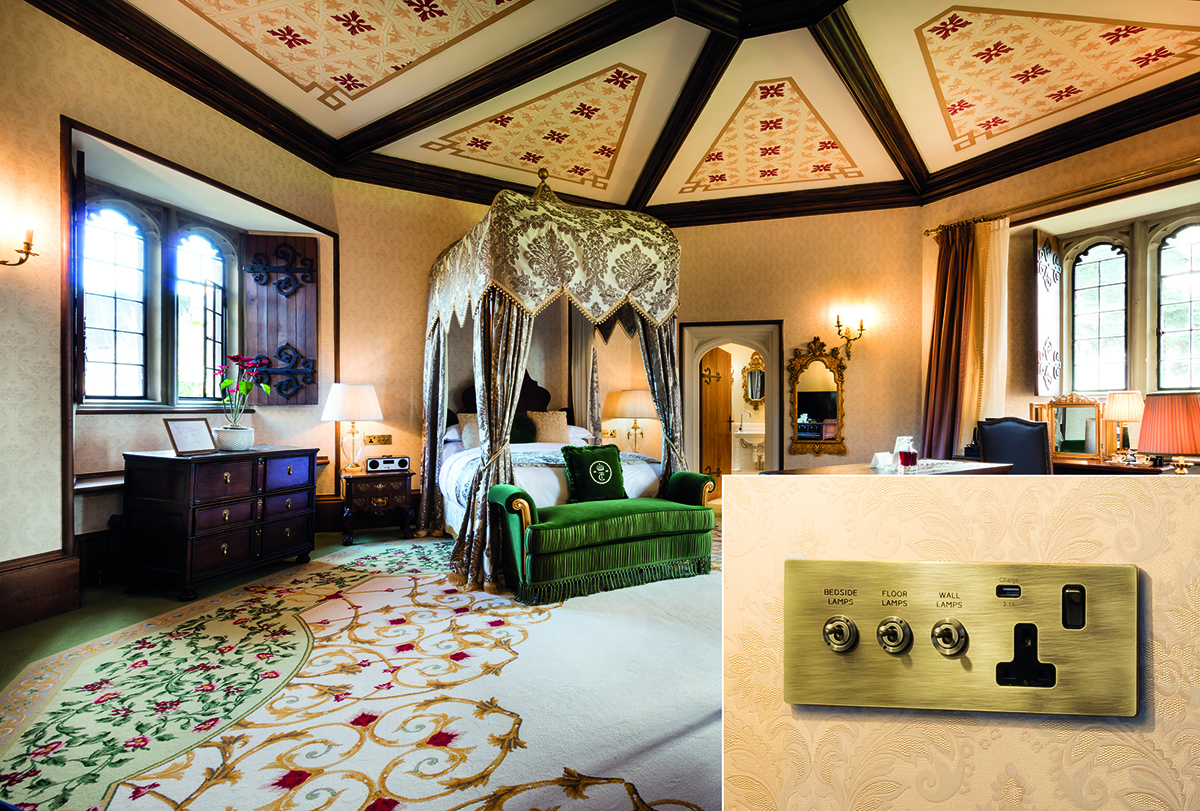 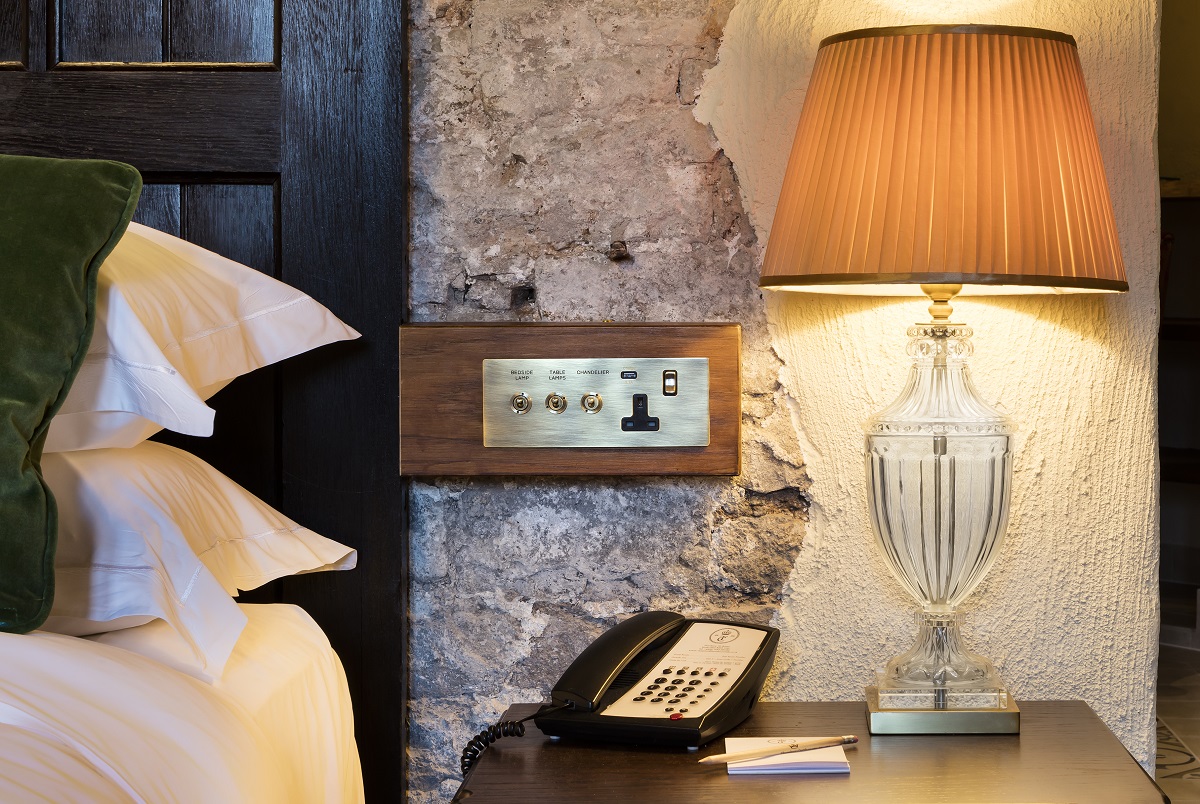 Sheer CFX was selected as the ideal design; a very flat plate with concealed fixings that sits almost flush to the wall, and again finished in Antique Brass with Black inserts. All three light sources are controlled with 3-Gang Toggle Switches – a retractive toggle for each light source – the perfect choice in a Tudor castle because they discreetly accentuate the period feel. To ensure ease of use by the guest, the function of each switch was clearly etched on the plate.

In some of the bedchambers, such as The Prince Arthur, the lavish dark wood bedhead is positioned up against the original stone wall. To meet conservation regulations, the custom-made plates were fixed to stained oak panels that were then affixed direct to the bedhead. When installing new accessories to original skirting board, the old recess was used wherever possible.

The desking area in each bedchamber required a second multi-functional bespoke plate.

Sheer CFX was again used for continuity, and the plate comprised: Double Switched Socket with Dual 2.1A/1A USB Charge Points plus an RJ45 CAT6 outlet for internet access. Everything one would need for using a laptop and to recharge other smart devices.

Atmospheric lighting control was achieved through the inclusion of Casambi Wireless Control modules fitted within the custom-made back box of each wiring accessory. This enabled the gradual dimming of the lights where scene setting was required: in the guest’s room upon entry and in zonal areas such as the hotel lobby and lounge.

Sustainability is a pre-requisite, even in a Tudor castle, and the Casambi modules provided a master control switch ensuring all room lights are automatically switched off as guests leave. 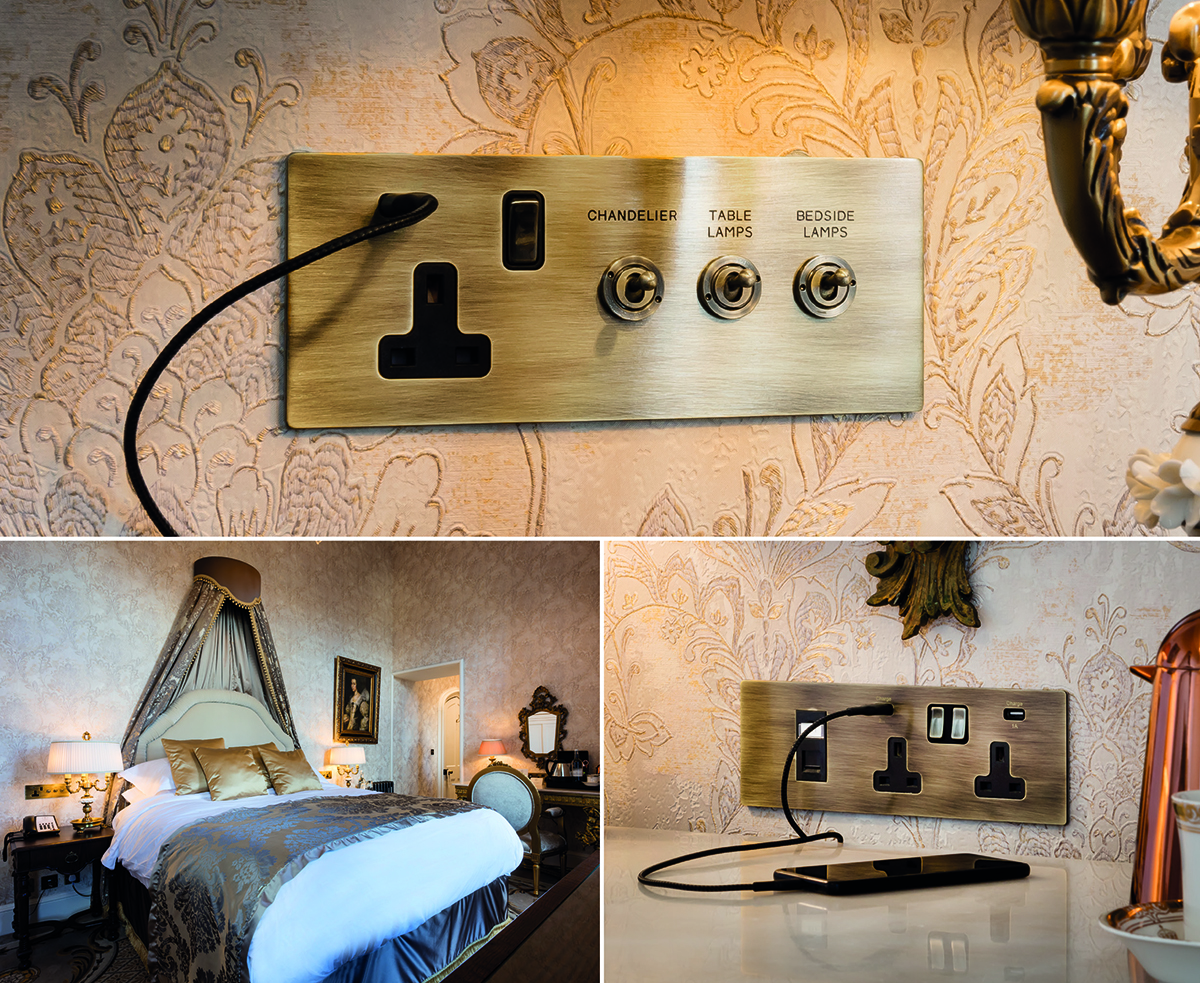 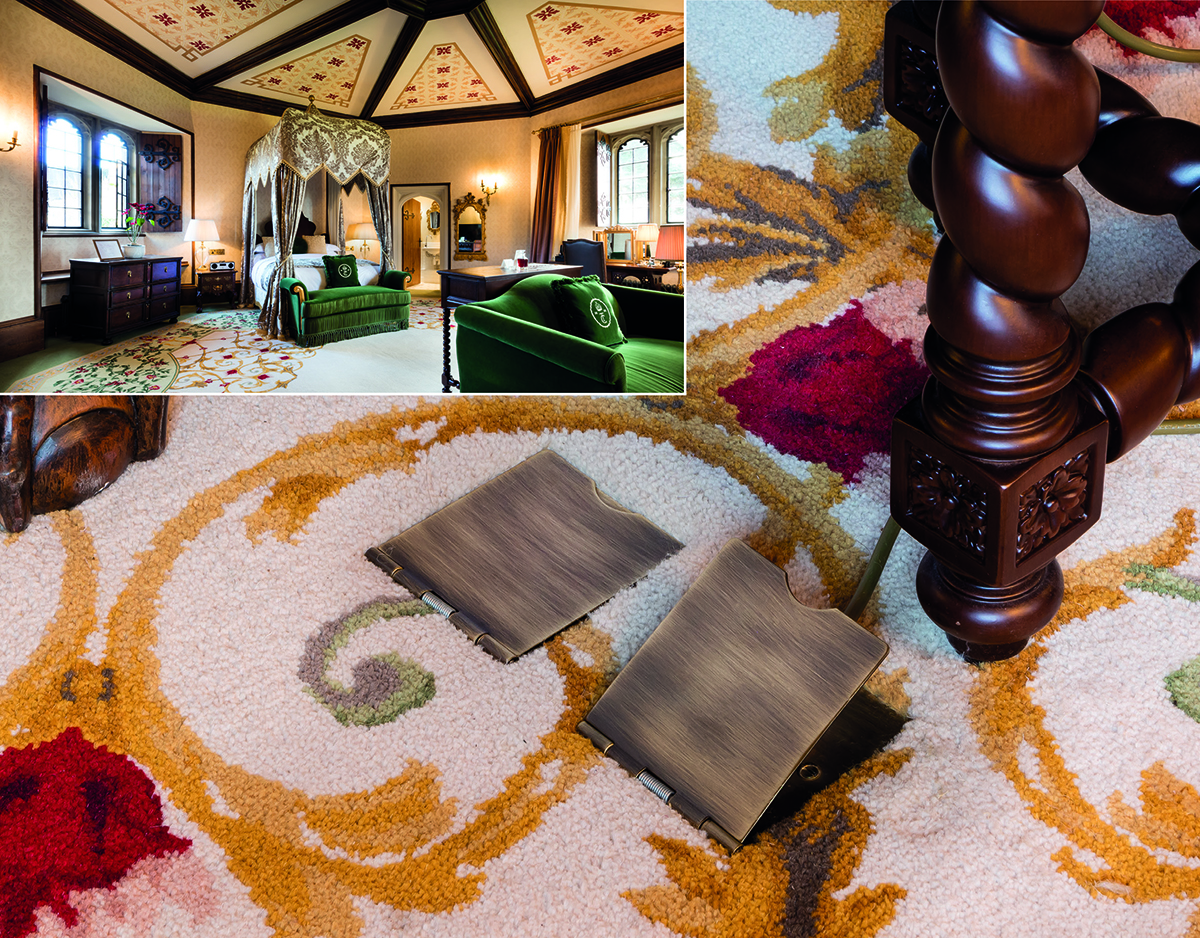 An occasional table with a decorative table lamp was positioned in the centre of the larger bedchambers and deluxe suites.

Again, a mixture of conservation and health & safety meant positioning a power socket within the original stone wall and to run a cable across the floor was not an option. Sheer floor power sockets positioned under the table, with a protective cover plate finished in Antique Brass, were used to deliver power to each lamp.

Each suite has a palatial bathroom, with either an ornate slipper bath, a walk-through wet room styled shower, or both. A Hartland shaver socket finished in bright chrome with black inserts was installed to complement the bathroom’s polished chrome tapware, delivering a feel of luxury-meets-stately-opulence.

The Results: The meticulous attention-to-detail delivered throughout this project by all concerned has contributed towards creating a totally unique guest experience of authentic Tudor hospitality. Candle holders would have replaced the decorative wiring accessories back in the day, yet nothing looks out of place. Hamilton’s expertise at delivering bespoke solutions that integrate both seamlessly and sympathetically within a ‘heritage’ project proved invaluable throughout this project.

Tony Long, Project Manager, Electrio Limited  said: “I’ve worked with Hamilton numerous times and have always been impressed with the quality of work they bring to a project. Knowing Hamilton’s ability, and I must say willingness to take on a brief for short run custom-made plates, sets them apart from other companies. A British manufacturer working on a very British project, it couldn’t have been a better fit – the dependable and trusted partner you need when working to such exacting standards.” 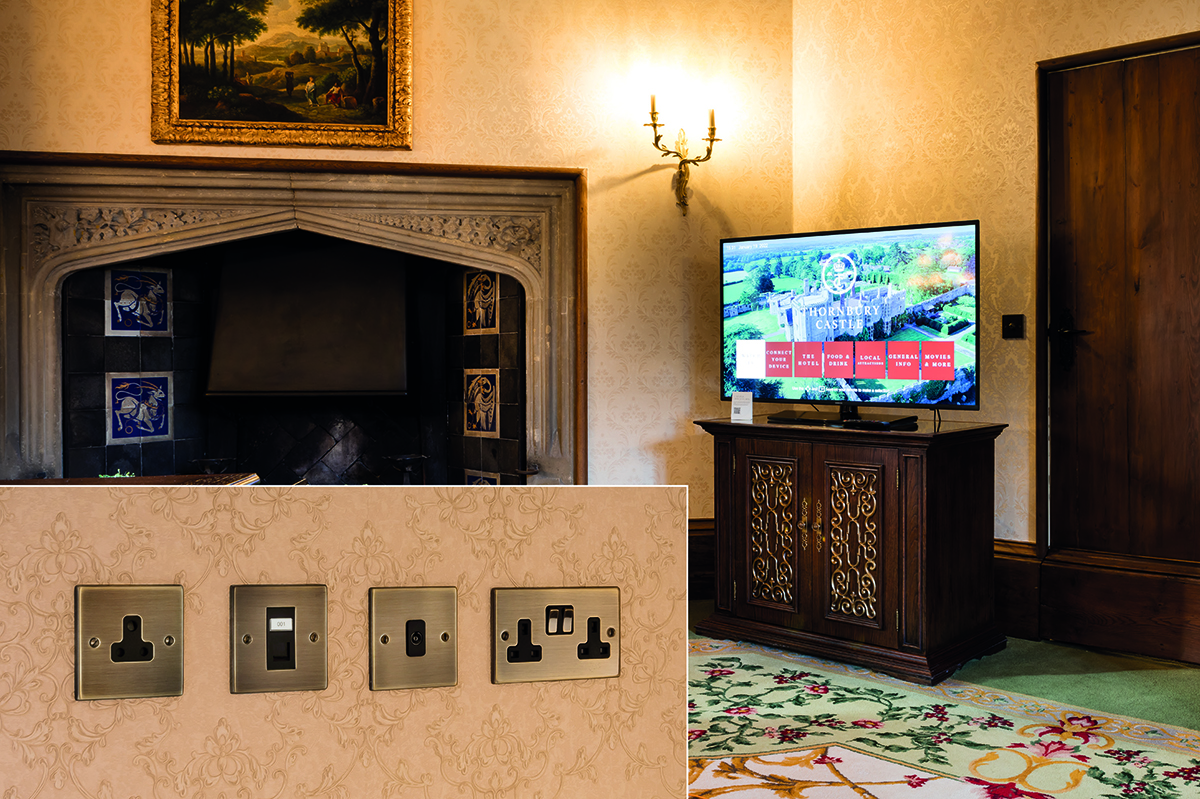 Mike Cox, Childs Sulzmann Architects: “Hamilton was brought to our attention by Tony at Electrio, and it proved an excellent decision. Hamilton were able to take our working drawings and to supply prototypes of the bespoke plates for us to approve quickly. Manufacturing short-run custom-made items is not suited to everyone, especially when expectations are so high. We look forward to working with Hamilton again on future projects.”

Simone Arcucci, General Manager, Thornbury Castle Hotel: “We are truly delighted with all of the recent refurbishment work, and we look forward to welcoming guests back to the splendour that is the Thornbury Castle Hotel. The standard of work throughout has been exceptional, and I know our discerning guests will appreciate the effort that has gone into the fine details. My personal thanks goes to the team at Hamilton, and the way they collaborated with others on this project.”

Sheer CFX Collection – All mounted on Antique Brass finished plates with concealed fixings, with Antique Brass switches and Black inserts, and a custom-made back box.